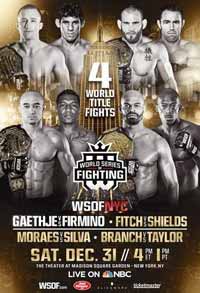 Review by AllTheBestFights.com: 2016-12-31, fight not so exciting between Jon Fitch and Jake Shields: it gets two stars.

Thye Wsof Ww champion Jon Fitch entered this fight with a mma record of 28-7-1 (36% finishing rate) and he is ranked as the No.19 welterweight in the world. He suffered his last loss when he faced Rousimar Palhares in 2014 (=Palhares vs Fitch) after this bout he has won over Yushin Okami (=Fitch vs Okami) and Joao Zeferino (=Fitch vs Zeferino).
His opponent, the black belt in Brazilian jiu-jitsu and former Strikeforce Mw champion Jake Shields, has an official record of 31-8-1 (48% finishing rate) but he is not ranked as he hasn’t fought since August 1, 2015 when he was defeated by Rousimar Palhares (=Palhares vs Shields). Fitch vs Shields is valid for the WSOF welterweight title (Fitch’s first defense); undercard of Justin Gaethje vs Luiz Firmino – WSOF 34. Watch the video and rate this fight!