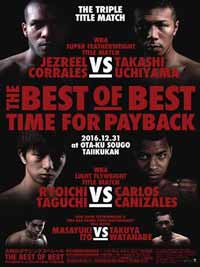 The Wba light-Flw champion Ryoichi Taguchi entered this fight with a pro record of 25-2-1 (11 knockouts) and he is ranked as the No.5 light flyweight in the world (currently the #1 in this division is Ganigan Lopez). He suffered his last loss when he faced Naoya Inoue in 2013, since then he has won seven bouts beating Juan Jose Landaeta (=Taguchi vs Landaeta) and Ryo Miyazaki in his last two (=Taguchi vs Miyazaki).
His opponent, the undefeated Carlos Canizales, has a perfect boxing record of 16-0-0 (13 KOs=81%) and he entered as the No.40 in the same weight class. He has already fought six times in 2016 but he has not faced any notable opponents. Taguchi vs Canizales is valid for the WBA World light flyweight title (held by Taguchi); undercard of Jezreel Corrales vs Takashi Uchiyama 2. Watch the video and rate this fight!