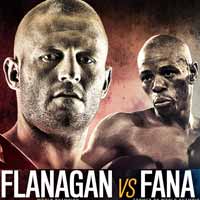 Review by AllTheBestFights.com: 2016-07-16, fight not so exciting between Terry Flanagan and Mzonke Fana: it gets three stars.

The undefeated Wbo champion Terry Flanagan entered this fight with a perfect record of 30-0-0 (12 knockouts) and he is ranked as the No.2 lightweight in the world (currently the #1 in this division is Rances Barthelemy). He has already fought once in 2016 beating Derry Mathews in their rematch (=Flanagan vs Mathews 2).
His opponent, the former Ibf super-Fw champion Mzonke Fana, has a boxing record of 38-9-0 (16 knockouts) and he entered as the No.28 in the same weight class. He lost to Hedi Slimani last year but then he has won over Xolani Mcotheli and Vusumzi Bokolo. Flanagan vs Fana is valid for the WBO World lightweight title; undercard of Guillermo Rigondeaux vs James Dickens. Watch the video and rate this fight!