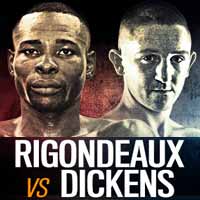 Review by AllTheBestFights.com: 2016-07-16, disappointing fight between Guillermo Rigondeaux and James Dickens: it gets two stars.

The 2000 and 2004 Olympic bantamweight gold medalist and Wba, Wbo super-Bw champion Guillermo Rigondeaux entered this fight with a perfect boxing record of 16-0-0 (10 knockouts) and he is ranked as the No.3 super bantamweight in the world (currently the #1 in this division is Carl Frampton). He fought just once last year winning over Drian Francisco (=Rigondeaux vs Francisco).
His opponent, James Dickens, has an official record of 22-1-0 (7 knockouts) and he entered as the No.64 in the same weight class. ‘Jazza’ suffered his only loss when he faced Kid Galahad in 2013, since then he has won six consecutive bouts beating Reynaldo Cajina in 2016. Rigondeaux vs Dickens is valid for the WBA Super World super bantamweight title. Watch the video and rate this fight!