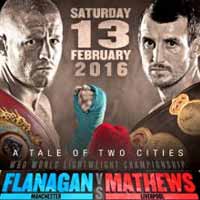 The undefeated Terry Flanagan entered this fight with a perfect boxing record of 29-0-0 (12 knockouts) and he is ranked as the No.3 lightweight in the world (currently the #1 in this division is Rances Barthelemy). He won the vacant Wbo Lw belt last year, against Jose Zepeda (=Flanagan vs Zepeda), and then he defended it once with Diego Magdaleno (=Flanagan vs Magdaleno).
His opponent, Derry Mathews, has an official record of 38-9-2 (20 knockouts) and he entered as the No.42 in the same weight class. He fought twice last year beating Gyorgy Mizsei Jr and Tony Luis (bout valid for the interim Wba Lw title, Mathews vs Luis). In their first bout Flanagan defeated Mathews by unanimous decision (October 6, 2012); this second fight is valid for the WBO World lightweight title (Flanagan’s second defense). Watch the video and rate this fight!