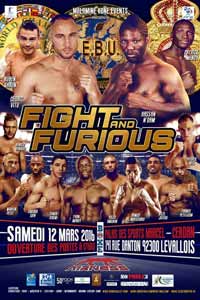 Review by AllTheBestFights.com: 2016-03-12, disappointing fight between Hassan N’Dam N’Jikam and Patrick Mendy: it gets two stars.

The former Wbo Mw champion Hassan N’Dam N’Jikam entered this fight with a professional boxing record of 31-2-0 (18 knockouts) and he is ranked as the No.18 middleweight in the world while his opponent, Patrick Mendy, has an official record of 16-9-1 (1 knockout) and he entered as the No.78 in the same weight class. Both boxers lost their last bout: N’Dam was defeated by David Lemieux (=Lemieux vs N’Dam N’Jikam) while Mendy lost to Kamil Szeremeta. N’Dam N’Jikam vs Mendy is on the undercard of Cedric Vitu vs Ruben Varon. Watch the video and rate this fight!