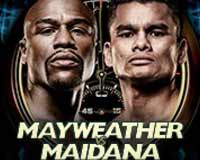 Review: 2014-05-03, great fight between Floyd Mayweather Jr and Marcos Maidana: it gets three stars. The undefeated Floyd Mayweather Jr entered this fight with a perfect record of 45-0-0 (26 knockouts) and he is ranked as the No.1 welterweight in the world, he has won world titles in five different weight classes and last year he fought twice: against Robert Guerrero (=Mayweather vs Guerrero) and Saul ‘Canelo’ Alvarez (=Mayweather vs Alvarez).
His opponent, Marcos Rene Maidana, has an official record of 35-3-0 (31 KOs=88%) and he entered as the No.6 in the same weight class, he suffered his last defeat when he moved up in weight class to the Ww division in 2012 and he faced Devon Alexander (=Alexander vs Maidana), after that bout ‘El Chino’ has fought and won four times. ‘Money’ Mayweather vs Maidana is valid for the WBC and WBA Super World welterweight titles; they also faced each other a second time on September 13, 2014 (=Mayweather vs Maidana 2). Watch the video and rate this fight!

Their next fight: Floyd Mayweather Jr vs Marcos Rene Maidana 2

(Alternative free embeddable video hosted on Ok.ru and not uploaded by AllTheBestFights, to report it please visit this link where the video is hosted)