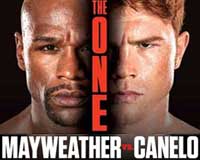 Review: 2013-09-14, the fight between Floyd Mayweather Jr and Saul Alvarez was not exactly the fight we expected: we were hoping for a war, an exciting and unforgettable bout, but it wasn’t (and also the CompuBox stats confirms that both fighters didn’t throw so many punches). Leaving aside our disappointment, the fight was pretty good and it’s interesting to see the comparison of two different boxing styles: Mayweather vs ‘Canelo’ Alvarez gets three stars (if you are interested here is also the post-fight press conference video). Both undefeated, Floyd Mayweather Jr (44-0-0, 26 KOs) entered as the No.1 welterweight in the world while Saul ‘Canelo’ Alvarez (42-0-1, 30 KOs) entered as the No.1 light middleweight. Mayweather vs Canelo, billed as “The One”, is valid for the WBC and WBA Super World light middleweight titles. Watch the video!

Event: THE ONE: Mayweather vs. Canelo