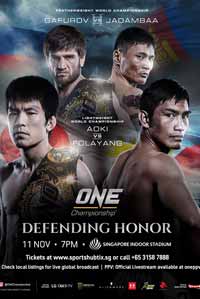 Review by AllTheBestFights.com: 2016-11-11, pretty good finish between Shinya Aoki and Eduard Folayang but it is not enough to get three stars: it gets two.

The black belt in Bjj, judo and current One Fc champion Shinya Aoki entered this fight with a mma record of 39-6-0 (69% finishing rate) and he is ranked as the No.28 lightweight in the world while his opponent, the black belt in wushu Eduard Folayang, has an official record of 16-5-0 (44% finishing rate). Aoki suffered his last loss when he faced Eddie Alvarez in 2012 (=Alvarez vs Aoki 2), since then he has collected nine consecutive victories beating Kazushi Sakuraba in his last one (=Sakuraba vs Aoki) while Folayang was defeated by Timofey Nastyukhin in 2014 (=Folayang vs Nastyukhin) but then he has won over Tetsuya Yamada and Adrian Pang. Aoki vs Folayang, main event of ONE FC 49, is valid for the ONE lightweight title (Aoki’s third defense); they also face each other a second time on March 31, 2019 (Eduard Folayang vs Shinya Aoki 2). Watch the video and rate this fight!