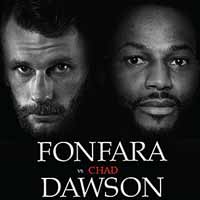 Review by AllTheBestFights.com: 2017-03-04, fight not particularly exciting between Andrzej Fonfara and Chad Dawson: it gets two stars.

The former Ibo light-Hw champion Andrzej Fonfara entered this fight with a pro record of 28-4-0 (16 knockouts) and he is ranked as the No.10 light heavyweight in the world (currently the #1 in this division is Andre Ward) but he comes off the loss against Joe Smith Jr (=Fonfara vs Smith Jr).
His opponent, the former Wbc, Ibf and Ibo light-Hw champion Chad Dawson, has an official boxing record of 34-4-0 (19 knockouts) and he entered as the No.19 in the same weight class. He lost to Tommy Karpency in 2014 (=Dawson vs Karpency) but then he has won over Dion Savage and Cornelius White (=Dawson vs White). Andrzej Fonfara vs Chad Dawson is on the undercard of Keith Thurman vs Danny Garcia. Watch the video and rate this fight!