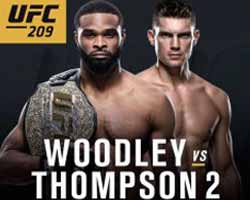 Review by AllTheBestFights.com: 2017-03-04, good finish but the rest of the fight was really boring: Tyron Woodley vs Stephen Thompson 2 gets two stars.

The current Ufc Ww champion Tyron Woodley entered this fight with a professional record of 16-3-1 (69% finishing rate) and he is ranked as the No.1 welterweight in the world. He lost to Rory MacDonald in 2014 but then he has collected three victories, winning the Ufc title against Robbie Lawler (=Lawler vs Woodley), and one draw, against Stephen Thompson at the end of 2016 (=Woodley vs Thompson I).
His opponent, the black belt in karate and ju-jitsu Stephen Thompson, has an official mma record of 13-1-1 (62% finishing rate) and he entered as the No.2 in the same weight class. He suffered his only defeat when he faced Matt Brown in 2012, since then he has won seven consecutive bouts beating Johny Hendricks (=Hendricks vs Thompson) and Rory MacDonald in 2016 (=MacDonald vs Thompson). Tyron Woodley vs Stephen Thompson 2, main event of Ufc 209, is valid for the Ufc welterweight title (Woodley ‘s second defense). Watch the video and rate this fight!

Their previous fight: Tyron Woodley vs Stephen Thompson I