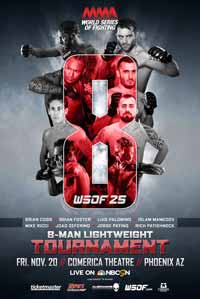 Brian Foster entered this fight with a pro mma record of 24-8-0 (92% finishing rate) and he is ranked as the No.51 lightweight in the world while his opponent, Joao Zeferino, has a record of 20-6-0 (80% finishing rate). Foster vs Zeferino 2 is the final of Wsof lightweight tournament; the Brazilian defeated Foster by submission in the quarterfinal but since Islam Mamedov and Mike Ricci were injured after winning the quarterfinals, Foster fought in the semifinal winning over Luis Palomino and going to the final, while in the other semifinal Zeferino beat Jorge Patino. Watch the video and rate this fight!