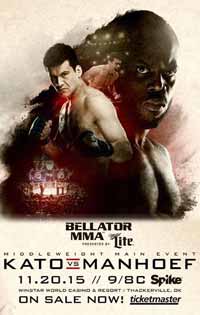 Review by AllTheBestFights.com: 2015-11-20, nice and tough exchanges between Melvin Manhoef and Hisaki Kato it is close to get four stars!

Hisaki Kato entered this fight with a professional mma record of 5-1-0 (100% ko/tko victory rate – he has never won via submission) and he is ranked as the No.75 middleweight in the world. He has fought twice in 2015 losing to Henrique Shiguemoto but then he has beat Joe Schilling with one of the best knockouts of the year (=Schilling vs Kato).
His opponent, Melvin Manhoef, has an official record of 29-12-1 (93% ko/tko victory rate) and he entered as the No.59 in the same weight class but he comes off two consecutive defeats: against Joe Schilling (=Manhoef vs Schilling) and Alexander Shlemenko (overturned in a no-contest after the Russian tested positive, Shlemenko vs Manhoef). Manhoef vs Kato is the main event of Bellator 146. Watch the video and rate this fight!