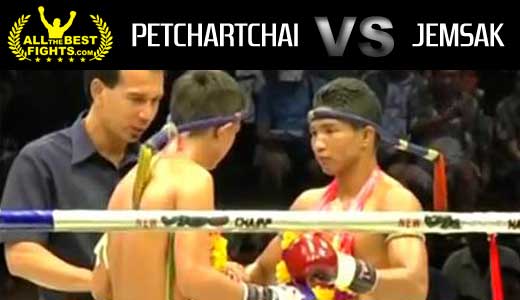 Review: 2013-10-18, good kicks, heavy knees and two knockdowns, this could be a very good fight, but not in this case…because after two rounds, Petchartchai Chaorai-Oi (red shorts) and Jemsak Sakburiram start an amazing back and forth battle: both fighters unload impressive elbows and wild punches in what might be named “the best muay thai round of the year”; probably this could happen only in Thailand or with a blind referee because it seems more a slaughter than a fight. But a candidate for muay thai Fight of the Year 2013 should have also a spectacular and unexpected ending…take a look! Both Petchartchai Chaorai-Oi and Jemsak Sakburiram are not in the top of the rankings and unfortunately we don’t know their record. Petchartchai vs Jemsak was held at Lumpinee Boxing Stadium (Bangkok, Thailand). Watch the video!