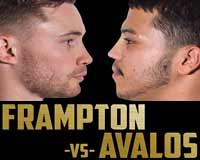 Review by AllTheBestFights.com: 2015-02-28, great fight between Carl Frampton and Chris Avalos: it gets three stars.

The undefeated Carl Frampton entered this fight with a perfect boxing record of 19-0-0 (13 knockouts) and he is ranked as the No.2 super bantamweight in the world (currently the #1 in this division is Guillermo Rigondeaux); he fought twice in 2014 beating Hugo Fidel Cazares (=Frampton vs Cazares) and Kiko Martinez in their rematch (bout valid for the Ibf super-Bw title, Martinez vs Frampton 2).
His opponent, Chris Avalos, has an official record of 25-2-0 (19 knockouts) and he entered as the No.5 in the same weight class; he lost twice by split decision: against Christopher Martin in 2010 and Jhonatan Romero in 2011 (when he was 22 years old Avalos vs Romero). After his second loss he has won six consecutive bouts beating Yasutaka Ishimoto and Jose Cen Torres in 2014. Frampton vs Avalos is valid for the IBF World super bantamweight title (Frampton’s first defense), first world title shot for Avalos. Watch the video and rate this fight!

Report broken video
« 2015 BOXING fight – Tyson Fury vs Christian Hammer – full fight Video
2015 K-1 MUAY THAI fight – Zabit Samedov vs Mert Akin – full fight Video »
HELP US!!! Since the CORONAVIRUS pandemic started, AllTheBestFights.com has struggled to survive! If you have enjoyed this website for the past 10 years, today we ask you for a little help: