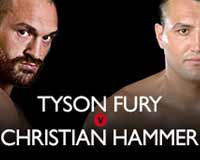 Review by AllTheBestFights.com: 2015-02-28, too much clinching and disappointing finish: Tyson Fury vs Christian Hammer gets two stars.

The undefeated Tyson Fury entered this fight with a perfect boxing record of 23-0-0 (17 knockouts) and he is ranked as the No.5 heavyweight in the world (currently the #1 in this division is Wladimir Klitschko); he fought twice in 2014 beating Joey Abell (=Fury vs Abell) and Dereck Chisora in their rematch (=Chisora vs Fury 2).
His opponent, Christian Hammer, has an official record of 17-3-0 (10 knockouts) and he entered as the No.11 in the same weight class; he suffered two consecutive losses in 2010, against Mariusz Wach and Taras Bidenko, since then he has won ten consecutive bouts, the last one against then-undefeated Irineu Beato Costa Junior (=Hammer vs Costa Junior). Fury vs Hammer is valid for the WBO International heavyweight title. Watch the video and rate this fight!