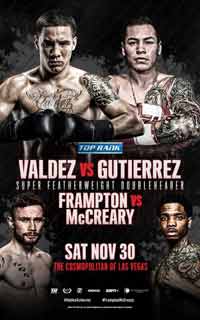 Review by AllTheBestFights.com: 2019-11-30, some good exchanges between Carl Frampton and Tyler McCreary but it is not enough to get three stars: it gets two.

The world champion in two different weight classes Carl Frampton entered this fight with a pro boxing record of 26-2-0 (15 knockouts) and he is ranked as the No.2 featherweight in the world. He fought three times last year beating Nonito Donaire (Carl Frampton vs Nonito Donaire) and Luke Jackson (Carl Frampton vs Luke Jackson) but then he lost to current #1 Fw Josh Warrington (4-stars fight, Josh Warrington vs Carl Frampton).
His opponent, the undefeated Tyler McCreary, has a record of 16-0-1 (7 knockouts) and he entered as the No.134 lightweight. He has fought twice in 2019 drawing with Roberto Castaneda and defeating Jessie Cris Rosales. Frampton vs McCreary is on the undercard of Oscar Valdez vs Adam Lopez. Watch the video and rate this fight!