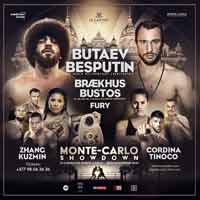 Both undefeated, the 2009 European youth championships gold medallist Alexander Besputin entered this fight with a perfect record of 13-0-0 (9 knockouts) and he is ranked as the No.16 welterweight in the world while his opponent, Radzhab Butaev, has an official record of 12-0-0 (9 KOs=75%) and he entered as the No.82 in the same weight class. In their last three bouts Besputin has won over Alan Sanchez, Juan Carlos Abreu and Alfredo Rodolfo Blanco while Butaev has beat Azael Cosio, Lanardo Tyner and Silverio Ortiz. Besputin vs Butaev is valid for the vacant WBA World welterweight title. Watch the video and rate this fight!