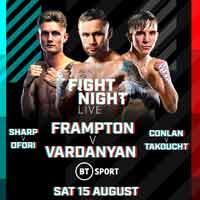 Review by AllTheBestFights.com: 2020-08-15, fight not particularly good between Carl Frampton and Darren Traynor: it gets two stars.
The former world champion in two different weight classes Carl Frampton entered this fight with a boxing record of 27-2-0 (15 knockouts) and he is ranked as the No.4 super featherweight in the world (currently the #1 in this division is Miguel Berchelt). He lost to Josh Warrington in 2018 (4-stars fight, Josh Warrington vs Carl Frampton) but he came back to win against Tyler McCreary in 2019 (Carl Frampton vs Tyler McCreary).
His opponent, Darren Traynor (who replaces Vahram Vardanyan), has an official record of 16-3-0 (7 knockouts) and he entered as the No.313 lightweight. He lost to Juli Giner in 2018 but he comes back to win against Des Newton in 2020. Traynor vs Frampton is the main event of the evening. Watch the video and rate this fight!