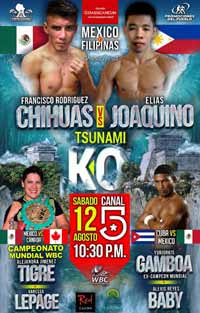 The former Wbo and Ibf minimumweight champion Francisco Rodriguez Jr entered this fight with a pro boxing record of 23-4-1 (15 knockouts) and he is ranked as the No.6 flyweight in the world (currently the #1 in this division is Donnie Nietes) while his opponent, the undefeated Elias Joaquino, has a record of 11-0-1 (6 knockouts) and he entered as the No.77 in the same weight class. ‘Chihuas’ Rodriguez lost to Moises Fuentes in 2015 (=Rodriguez vs Fuentes) but then he has won five consecutive bouts beating Hector Rolando Gusman in his last one (=Rodriguez vs Gusman). Francisco Rodriguez Jr vs Elias Joaquino is the main event of the evening. Watch the video and rate this fight!