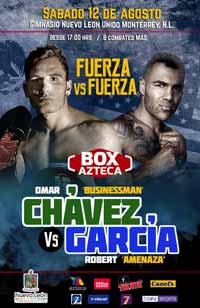 Review by AllTheBestFights.com: 2017-08-12, some good exchanges between Omar Chavez and Roberto Garcia but it is not enough to get three stars: it gets two.

Omar Chavez entered this fight with a professional boxing record of 36-3-1 (24 knockouts) and he is ranked as the No.36 middleweight in the world. He lost to Ramon Alvarez in 2014 (=Chavez vs Alvarez) but then he has won four bouts taking revenge on Alvarez in his last fight.
His opponent, Roberto Garcia, has an official record of 40-3-0 (24 knockouts) and he entered as the No.42 super welterweight. He suffered his last loss when he faced Antonio Margarito in 2010, since then he has collected 12 consecutive victories defeating Nestor Fernando Garcia in 2017. Roberto Garcia vs Omar Chavez is the main event of the evening. Watch the video and rate this fight!