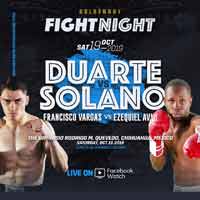 Review by AllTheBestFights.com: 2019-10-19, fight not so exciting between Francisco Vargas and Ezequiel Aviles: it gets two stars.

The former Olympian and former Wbc super-Fw champion Francisco Vargas entered this fight with a record of 25-2-2 (18 knockouts) and he is ranked as the No.7 super featherweight in the world but he comes off the loss against current #1 super-Fw Miguel Berchelt (Miguel Berchelt vs Francisco Vargas 2); before this bout, in 2018, he had defeated Rod Salka (Francisco Vargas vs Rod Salka).
His opponent, Ezequiel Aviles, has an official boxing record of 16-4-3 (6 knockouts) and he entered as the No.285 lightweight but he comes off three consecutive losses, the last one against Hector Tanajara. Vargas vs Aviles is on the undercard of Oscar Duarte vs Richard Solano. Watch the video and rate this fight!

Report broken video
« Best fights of the week 42, year 2019
2019 BOXING fight – Elwin Soto vs Edward Heno – full fight Video WBO »
HELP US!!! Since the CORONAVIRUS pandemic started, AllTheBestFights.com has struggled to survive! If you have enjoyed this website for the past 10 years, today we ask you for a little help: