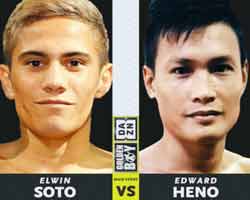 Review by AllTheBestFights.com: 2019-10-24, nice exchanges between Elwin Soto and Edward Heno: it gets three stars.

The Wbo light-Flw champion Elwin Soto entered this fight with a professional boxing record of 15-1-0 (11 knockouts) and he is ranked as the No.3 light flyweight in the world (currently the #1 in this division is Ken Shiro). He was defeated by Danny Andujo in 2017 but since then he has won 13 consecutive fights winning over Edgar Ornelas, Joel Castro Cano and Angel Acosta in 2019 (Angel Acosta vs Elwin Soto).
His opponent, the undefeated Edward Heno, has an official record of 14-0-5 (5 knockouts) and he entered as the No.10 in the same weight class. He was stopped by Seita Ogido in May 2017 but then he beat him in the rematch in September; after this bout he has won over Merlito Sabillo, Jesse Espinas (Edward Heno vs Jesse Espinas) and Koji Itagaki. Soto vs Heno is valid for the WBO World light flyweight title (Soto’s first defense). Watch the video and rate this fight!