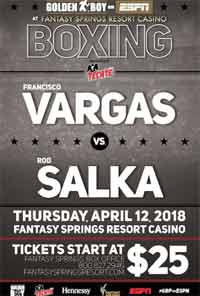 Review by AllTheBestFights.com: 2018-04-12, pretty good fight between Francisco Vargas and Rod Salka: it gets three stars.

The former Wbc super-Fw champion Francisco Vargas entered this fight with a professional boxing record of 24-1-2 (17 knockouts) and he is ranked as the No.5 super featherweight in the world (currently the #1 in this division is Vasyl Lomachenko). He fought twice last year losing to Miguel Berchelt (4-stars fight, Vargas vs Berchelt) and beating Stephen Smith (Francisco Vargas vs Stephen Smith).
His opponent, Rod Salka, has an official record of 24-4-0 (4 knockouts) and he entered as the No.94 lightweight. He suffered his last loss when he faced Danny Garcia in 2014 (Danny Garcia vs Rod Salka), since then he has won five bouts defeating Jayro Duran in 2017. Vargas vs Salka is the main event of the evening. Watch the video and rate this fight!