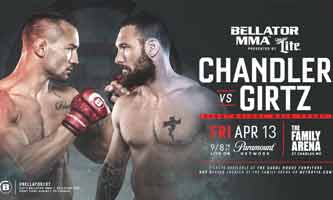 Review by AllTheBestFights.com: 2018-04-13, good finish between Michael Chandler and Brandon Girtz: it gets three stars.

The former Bellator Lw champion Michael Chandler entered this fight with a professional mma record of 17-4-0 (76% finishing rate) and he is ranked as the No.13 lightweight in the world. He fought and lost once in 2017, against Brent Primus (Michael Chandler vs Brent Primus), but he came back to win in 2018 with Goiti Yamauchi (Michael Chandler vs Goiti Yamauchi).
His opponent, Brandon Girtz, has an official record of 15-7-0 (73% finishing rate) and he entered as the No.90 in the same weight class. He suffered three consecutive losses between 2016 and 2017, the last one with Derek Campos (Derek Campos vs Brandon Girtz 3), but then he has beat Luka Jelcic. Chandler vs Girtz is the main event of Bellator 197. Watch the video and rate this fight!