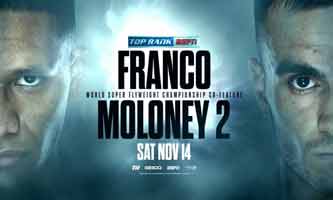 Review by AllTheBestFights.com: 2020-11-14, we hope to see a third fight between Joshua Franco and Andrew Moloney 2: it gets two stars.
The Wba super-Flw champion Joshua Franco entered this fight with a pro record of 17-1-2 (8 knockouts) and he is ranked as the No.7 super flyweight in the world (currently the #1 in this division is Juan Francisco Estrada). He was defeated by Lucas Emanuel Fernandez Leone in 2018 but since then he has collected two draws and four victories, beating Jose Alejandro Burgos and Andrew Moloney in his last two (Andrew Moloney vs Joshua Franco I).
His opponent, the former interim Wba super-Flw champ Andrew Moloney, has a boxing record of 21-1-0 (14 knockouts) and he entered as the No.9 in the same weight class. Before losing to Franco in their first bout, he had fought three times in 2019 defeating Miguel Gonzalez (Andrew Moloney vs Miguel Gonzalez), Selemani Bangaiza and Elton Dharry (Andrew Moloney vs Elton Dharry). Moloney vs Franco 2 is valid for the WBA World super-flyweight title (Franco’s first defense); undercard of Terence Crawford vs Kell Brook. Watch the video and rate this fight!

Result: Click here to show the fight’s result
Joshua Franco vs Andrew Moloney (NO Decision due to Franco’s eye damaged from an accident headbutt)

Their previous fight: Andrew Moloney vs Joshua Franco I

Their next fight: Joshua Franco vs Andrew Moloney 3