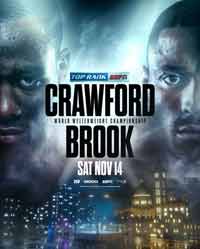 Review by AllTheBestFights.com: 2020-11-14, good performance by both boxers: Joshua Greer Jr vs Edwin Rodriguez gets three stars.
Joshua Greer Jr entered this fight with a record of 22-2-1 (12 knockouts) and he is ranked as the No.16 bantamweight in the world but he comes off the loss against Mike Plania (via majority decision, Joshua Greer Jr vs Mike Plania); in his previous two bouts, in 2019, he had beat Nikolai Potapov (via majority decision, Joshua Greer Jr vs Nikolai Potapov) and Antonio Nieves (Joshua Greer Jr vs Antonio Nieves).
His opponent, Edwin Rodriguez, has an official boxing record of 11-5-1 (5 knockouts) and he entered as the No.36 in the same weight class. He lost to Christian Carto in 2018 but then he has collected one draw and two victories defeating Saul Sanchez in his last one. Rodriguez vs Greer is on the undercard of Terence Crawford vs Kell Brook. Watch the video and rate this fight!