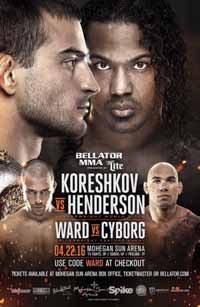 Review by AllTheBestFights.com: 2016-04-22, pretty good finish between Patricio Freire and Henry Corrales but it is not enough to get three stars: it gets two.

The black belt in Brazilian jiu-jitsu and former Bellator fw champion Patricio Freire entered this fight with a pro mma record of 24-3-0 (75% finishing rate) and he is ranked as the No.6 featherweight in the world (currently the #1 in this division is Frankie Edgar) while his opponent, Henry Corrales, has a record of 12-2-0 (83% finishing rate). Both fighters lost their last bout: ‘Pitbull’ Freire was defeated by Daniel Straus (=Freire vs Straus 3) while Corrales lost to Emmanuel Sanchez. Freire vs Corrales is on the undercard of Andrey Koreshkov vs Benson Henderson – Bellator 153. Watch the video and rate this fight!