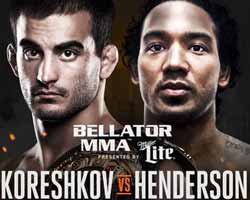 Review by AllTheBestFights.com: 2016-04-22, fight not particularly exciting between Benson Henderson and Andrey Koreshkov: it gets two stars.

The Bellator Ww champion Andrey Koreshkov entered this fight with a professional mma record of 18-1-0 (72% finishing rate) and he is ranked as the No.16 welterweight in the world. He suffered his only loss when he faced Ben Askren in 2013 (=Askren vs Koreshkov), since then he has won five consecutive bouts beating Douglas Lima in 2015 (=Lima vs Koreshkov).
His opponent, the black belt in Bjj, tae-kwon-do and former Ufc Lw champion Benson Henderson, has an official record of 23-5-0 (52% finishing rate) and he entered as the No.12 in the same weight class. He lost two consecutive fights between 2014 and 2015, against Rafael dos Anjos (=Henderson vs dos Anjos) and Donald Cerrone (=Cerrone vs Henderson 3), but then he defeated Brandon Thatch (=Henderson vs Thatch) and Jorge Masvidal (=Henderson vs Masvidal). Koreshkov vs Henderson, main event of the Bellator 153, is valid for the Bellator welterweight title (Koreshkov’s first defense). Watch the video and rate this fight!