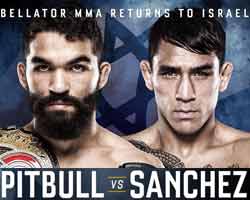 Review by AllTheBestFights.com: 2018-11-15, great performance by both fighters: Patricio Freire vs Emmanuel Sanchez gets three stars.

The black belt in Brazilian jiu-jitsu and current Bellator fw champion Patricio Freire entered this fight with a professional mma record of 27-4-0 (74% finishing rate) and he is ranked as the No.7 featherweight in the world (currently the #1 in this division is Max Holloway). Patricio ‘Pitbull’ lost to Benson Henderson in 2016 (Henderson vs Freire) but then he beat Daniel Straus in 2017 (Daniel Straus vs Patricio Freire 4) and Daniel Weichel in 2018 (Patricio Freire vs Daniel Weichel).
His opponent, Emmanuel Sanchez, has an official record of 17-3-0 (47% finishing rate) and he entered as the No.13 in the same weight class. He was defeated by Daniel Weichel in 2016 (Weichel vs Sanchez) but then he has won four bouts beating Daniel Straus (Daniel Straus vs Emmanuel Sanchez) and Sam Sicilia in his last two (Emmanuel Sanchez vs Sam Sicilia). Freire vs Sanchez, main event of Bellator 209, is valid for the Bellator featherweight title (Freire’s second defense); they also faced each other a second time on April 2, 2021 (Patricio Freire vs Emmanuel Sanchez 2). Watch the video and rate this fight!