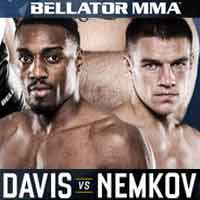 Review by AllTheBestFights.com: 2018-11-15, some good exchanges between Phil Davis and Vadim Nemkov but it is not enough to get three stars: it gets two.

The former Bellator light-Hw champion Phil Davis entered this fight with a pro mma record of 19-4-0 (47% finishing rate) and he is ranked as the No.2 light heavyweight in the world (currently the #1 in this division is Daniel Cormier). He lost to Ryan Bader last year (Davis vs Bader 2) but then he has defeated Leonardo Leite (Phil Davis vs Leonardo Leite) and Linton Vassell (Phil Davis vs Linton Vassell).
His opponent, the three times world combat sambo champion Vadim Nemkov, has a record of 9-2-0 (100% finishing rate) and he entered as the No.15 in the same weight class. He suffered two consecutive losses between 2015 and 2016, against Jiri Prochazka (Jiri Prochazka vs Vadim Nemkov) and Karl Albrektsson but then he has won four bouts beating Philipe Lins and Liam McGeary in his last two (Liam McGeary vs Vadim Nemkov). Davis vs Nemkov is on the undercard of Patricio Freire vs Emmanuel Sanchez – Bellator 209; they also faced each other a second time on April 16, 2021 (Vadim Nemkov vs Phil Davis 2). Watch the video and rate this fight!