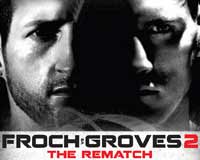 Review: 2014-05-31, the second fight between Carl Froch and George Groves was not as exciting as their first bout but it is close to get four stars thanks to a spectacular finish! Carl Froch entered this fight with a professional boxing record of 32-2-0 (23 knockouts) and he is ranked as the No.2 super middleweight in the world, he suffered his last defeat in 2011 when he faced #1 Andre Ward (in the final of the Super Six World Boxing Classic tournament, Ward vs Froch), since then he has fought and won four times winning the IBF super-Mw title against then-undefeated Lucian Bute in 2012 (=Froch vs Bute) and successfully defended it against Yusaf Mack (=Froch vs Mack); then he beat Mikkel Kessler (=Froch vs Kessler 2) and George Groves (four-stars-fight, Froch vs Groves I).
His opponent, the 26-year-old George Groves (10 years younger than Froch), has an official record of 19-1-0 (15 KOs=79%) and he entered as the No.7 in the same weight class, he has never won a world title but he was ahead on points during the first bout against Froch till the referee ended the contest prematurely… Froch vs Groves 2 is valid for the IBF and WBA Super World super middleweight titles. Watch the video and rate this fight!

Video: (Free embeddable video hosted on Myvideo.ge and not uploaded by AllTheBestFights, to report it please visit this link where the video is hosted)