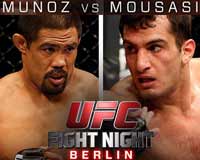 Review: 2014-05-31, great fight between Mark Munoz and Gegard Mousasi: it was the best fight of the night and it gets three stars (UFC Performance of the Night). The black belt in Bjj Mark Munoz entered this fight with a professional mma record of 13-4-0 (54% finishing rate) and he is ranked as the No.9 middleweight in the world, he fought twice in 2013 defeating Tim Boetsch in July (=Munoz vs Boetsch) but then he lost to Lyoto Machida by ko in the first round in October (=Machida vs Munoz).
His opponent, the black belt in judo and former Strikeforce light-Hw champion Gegard Mousasi, has an official record of 34-4-2 (85% finishing rate) and he entered as the No.17 in the same weight class, he fought three times last year beating Mike Kyle (=Mousasi vs Kyle) and Ilir Latifi (=Mousasi vs Latifi) but then he was defeated by Lyoto Machida (via unanimous decision, Machida vs Mousasi); currently the #1 in this division is Chris Weidman. Munoz vs Mousasi is the main event of UFC Fight Night Berlin – Ufn 41. Watch the video and rate this fight!