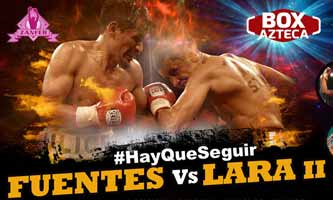 Review by AllTheBestFights.com: 2017-10-28, nice and tough exchanges between Moises Fuentes and Ulises Lara 2: it gets three stars.

The former world champion in two different weight classes Moises Fuentes entered this fight with a record of 24-4-1 (13 knockouts) and he is ranked as the No.27 bantamweight in the world but he comes off two consecutive losses, with Kosei Tanaka (=Fuentes vs Tanaka) and Ulises Lara in their first and previous bout (=Fuentes vs Lara I).
His opponent, Ulises Lara, has an official boxing record of 18-15-2 (10 knockouts) and he entered as the No.25 super flyweight. He has fought twice in 2017 losing to Maximino Flores and beating Fuentes. Fuentes vs Lara 2 is the main event of the evening. Watch the video and rate this fight!

Their previous fight: Moises Fuentes vs Ulises Lara I