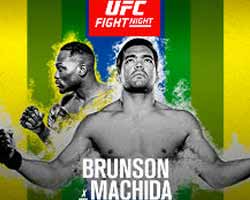 Review by AllTheBestFights.com: 2017-10-28, fight not so exciting between Derek Brunson and Lyoto Machida: it gets two stars (UFC Performance of the Night).

Derek Brunson entered this fight with a professional mma record of 17-5-0 (76% finishing rate) and he is ranked as the No.10 middleweight in the world (currently the #1 in this division is Michael Bisping). He lost two consecutive bouts between 2016 and 2017, against Robert Whittaker (=Whittaker vs Brunson) and Anderson Silva (=Silva vs Brunson), but then he came back to win with Dan Kelly (=Brunson vs Kelly).
His opponent, the black belt in karate, Bjj and former Ufc light-hw champion Lyoto Machida, has an official record of 22-7-0 (50% finishing rate) but he is not ranked as he hasn’t fought since June 27, 2015 when he was defeated by Yoel Romero (=Machida vs Romero); before this bout he had also lost to Luke Rockhold (=Machida vs Rockhold). Brunson vs Machida is the main event of UFC Fight Night 119. Watch the video and rate this fight!