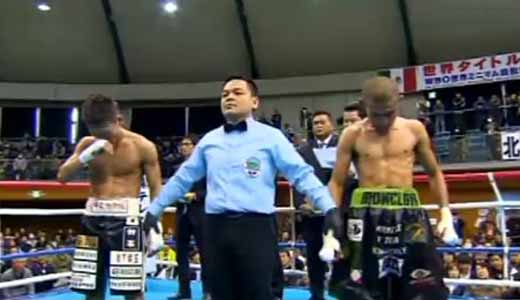 Review by AllTheBestFights.com: 2017-02-26, exciting and tough fight thanks to an amazing performance by both boxers: Moises Calleros vs Tatsuya Fukuhara is one of the best boxing fights of 2017 and it gets four stars!

Moises Calleros entered this fight with a boxing record of 25-6-1 (14 knockouts) and he is ranked as the No.10 minimumweight in the world (currently the #1 in this division is Wanheng Menayothin). He lost two consecutive fights between 2013 and 2014, against Francisco Rodriguez Jr and Samuel Gutierrez, but then he has won five bouts beating Mario Rodriguez in his last one.
His opponent, Tatsuya Fukuhara, has an official record of 18-4-6 (7 knockouts) and he entered as the No.11 in the same weight class. He suffered his last loss when he faced Takuma Inoue in 2013, since then he has collected three draws and six victories defeating Genki Hanai in his last one. Tatsuya Fukuhara vs Moises Calleros is valid for the interim WBO World minimumweight title. Watch the video and rate this fight!