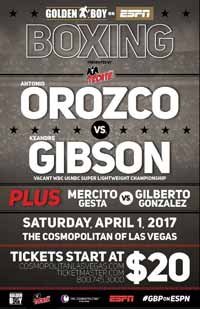 Review by AllTheBestFights.com: 2017-04-01, good fight between Mercito Gesta and Gilberto Gonzalez: it gets three stars.

Mercito Gesta entered this fight with a professional record of 29-1-2 (16 knockouts) but he is not ranked as he hasn’t fought since October 3, 2015 when he beat Miguel Angel Mendoza. He suffered his last loss when he faced Miguel Vazquez in 2012 (=Vazquez vs Gesta), since then he has collected three victories and one draw.
His opponent, Gilberto Gonzalez, has a boxing record of 26-3-0 (22 KOs=85%) and he entered as the No.54 lightweight. He also suffered his last defeat in 2012, against Ricardo Dominguez, but after this fight he has won eight consecutive bouts. Mercito Gesta vs Gilberto Gonzalez is on the undercard of Antonio Orozco vs Keandre Gibson. Watch the video and rate this fight!