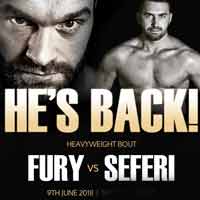 Review by AllTheBestFights.com: 2018-06-09, really disappointing fight between Tyson Fury and Sefer Seferi: it gets one star!

The undefeated former IBF, IBO, WBA, and WBO Hw champion Tyson Fury entered this fight with a perfect record of 25-0-0 (18 knockouts) but he is not ranked as he hasn’t fought since November 28, 2015 when he defeated Wladimir Klitschko (Wladimir Klitschko vs Tyson Fury); before this bout, in 2015, he had beat also Christian Hammer (Fury vs Hammer).
His opponent, Sefer Seferi, has a boxing record of 23-1-0 (21 KOs=91%) and he entered as the No.64 cruiserweight in the world. He suffered his only loss when he faced Manuel Charr in 2016, after this bout he has won over Marcelo Ferreira dos Santos and Laszlo Hubert. Fury vs Seferi is the main event of the evening. Watch the video and rate this fight!