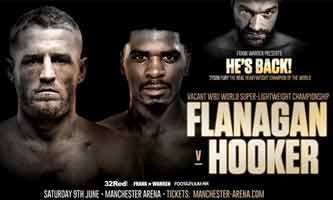 Review by AllTheBestFights.com: 2018-06-09, some good exchanges but with too much clinching in the second part of the fight: Terry Flanagan vs Maurice Hooker gets two stars.

Both undefeated, the former Wbo Lw champion Terry Flanagan entered this fight with a perfect boxing record of 33-0-0 (13 knockouts) but he is not ranked as he hasn’t fought since April 8, 2017 when he defeated Petr Petrov (Terry Flanagan vs Petr Petrov) while his opponent, Maurice Hooker, has an official record of 23-0-3 (16 knockouts) and he entered as the No.44 super lightweight in the world. Flanagan, before beating Petrov, had fought and won three times in 2016, winning over Derry Mathews (Flanagan vs Mathews 2), Mzonke Fana (Flanagan vs Fana) and Orlando Cruz (Flanagan vs Cruz), while ‘Mighty Mo’ Hooker was stopped by Darleys Perez in a draw in 2016 but then he has beat Cristobal Cruz and Courtney Jackson. Flanagan vs Hooker is valid for the vacant WBO World super lightweight title; undercard of Tyson Fury vs Sefer Seferi. Watch the video and rate this fight!

(Free embeddable video hosted on Youtube and not uploaded by AllTheBestFights)
https://www.youtube.com/watch?v=2VGcXQvxdlc