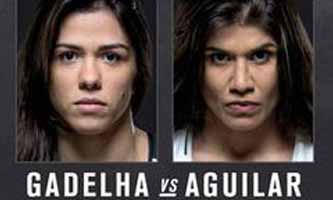 Review by AllTheBestFights.com: 2015-08-01, some good exchanges between Jessica Aguilar and Claudia Gadelha but it is not enough to get three stars: it gets two.

The former WSOF champion Jessica Aguilar entered this fight with a mma record of 19-4-0 (53% finishing rate) and she is ranked as the No.2 women’s strawweight in the world. She suffered her last defeat (via split decision) in 2010 when she faced Zoila Frausto Gurgel at Bellator 31, since then she has collected ten consecutive victories beating Kalindra Faria in his last bout (=Aguilar vs Faria).
Her opponent, the black belt in Bjj Claudia Gadelha, has a record of 12-1-0 (67% finishing rate) and she entered as the No.5 in the same weight class but she comes off the loss to #1 Ufc champion Joanna Jedrzejczyk. Aguilar vs Gadelha, Ufc women’s strawweight championship title eliminator, is on the undercard of Ronda Rousey vs Bethe Correia – UFC 190. Watch the video and rate this fight!