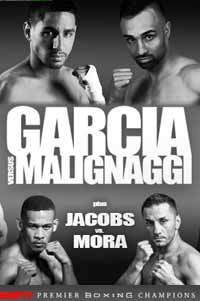 Review by AllTheBestFights.com: 2015-08-01, great start between Daniel Jacobs and Sergio Mora: it gets three stars.

Daniel Jacobs entered this fight with a pro boxing record of 29-1-0 (26 KOs=90%) and he is ranked as the No.7 middleweight in the world (currently the #1 in this division is Gennady Golovkin). He suffered his only loss when he faced Dmitry Pirog in 2010, since then he has won nine consecutive bouts beating Caleb Truax in his last one (=Jacobs vs Truax).
His opponent, the former Wbc light-Mw champion Sergio Mora, has a record of 28-3-2 (9 knockouts) and he entered as the No.35 in the same weight class. His last loss occurred in 2012 when he faced for the second time Brian Vera (=Vera vs Mora 2); after this bout he has collected five victories winning over Abraham Han in 2015 (=Mora vs Han). Jacobs vs Mora is valid for the WBA World middleweight title (held by Jacobs); undercard of Danny Garcia vs Paul Malignaggi. Watch the video and rate this fight!