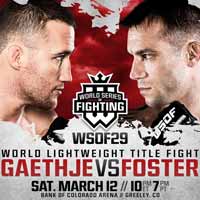 Review by AllTheBestFights.com: 2016-03-12, great start between Justin Gaethje and Brian Foster: it gets three stars.

The undefeated Justin Gaethje entered this fight with a perfect mma record of 15-0-0 (87% finishing rate) and he is ranked as the No.10 lightweight in the world (currently the #1 in this division is Rafael dos Anjos). He fought twice last year beating Luis Palomino twice (the fight of the year 2015 candidate Gaethje vs Palomino I and Gaethje vs Palomino II).
His opponent, the former Ufc fighter Brian Foster, has an official record of 25-8-0 (96% finishing rate) and he entered as the No.26 in the same weight class. He fought five times last year losing twice, but then he won the WSOF lightweight tournament beating Joao Zeferino in the final (=Foster vs Zeferino 2). Gaethje vs Foster, main event of the Wsof 29, is valid for the WSOF lightweight title (Gaethje’s fourth defense). Watch the video and rate this fight!