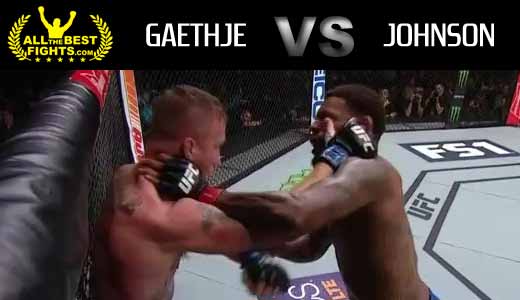 Review by AllTheBestFights.com: 2017-07-07, back-and-forth action with some tremendous exchanges: Michael Johnson vs Justin Gaethje was an absolute war and it is a candidate for Mma Fight of the Year 2017, it gets five stars (UFC Fight of the Night and UFC Performance of the Night).

Michael Johnson entered this fight with a professional mma record of 17-11-0 (59% finishing rate) and he is ranked as the No.14 lightweight in the world but he won just one out of his last four bouts, against Dustin Poirier last year (=Poirier vs Johnson). After this bout he was defeated by Khabib Nurmagomedov (=Johnson vs Nurmagomedov).
His opponent, the undefeated Wsof Lw champion Justin Gaethje, has a perfect record of 17-0-0 (88% finishing rate) and he entered as the No.10 in the same weight class (currently the #1 in this division is Conor McGregor). He fought twice last year winning over Brian Foster (=Gaethje vs Foster) and Luiz Firmino (=Gaethje vs Firmino). Justin Gaethje vs Michael Johnson is the main event of “The Ultimate Fighter: Redemption Finale” – UFC Tuf 25. Watch the video and rate this fight!