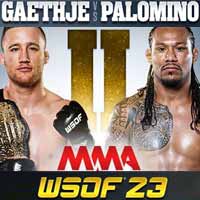 Review by AllTheBestFights.com: 2015-09-18, tough and entertaining fight thanks to a great performance by both fighters: Justin Gaethje vs Luis Palomino 2 gets three stars.

The undefeated Justin Gaethje entered this fight with a perfect mma record of 14-0-0 (86% finishing rate) and he is ranked as the No.13 lightweight in the world while his opponent, the black belt in Bjj Luis Palomino, has an official record of 23-10-0 (65% finishing rate) and he entered as the No.55 in the same weight class. In their first bout, candidate for the 2015 Mma Fight of the Year, Gaethje defeated ‘Baboon’ Palomino in three rounds (March 28, 2015, Gaethje vs Palomino I); also this second fight, main event of Wsof 23, is valid for the WSOF lightweight title (held by Gaethje). Watch the video and rate this fight!

Their previous fight: Justin Gaethje vs Luis Palomino I