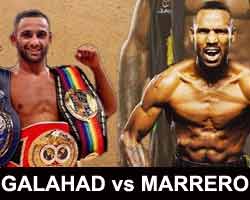 Review by AllTheBestFights.com: 2020-02-08, pretty good fight between Kid Galahad and Claudio Marrero: it gets three stars.

Kid Galahad entered this fight with a pro record of 26-1-0 (15 knockouts) and he is ranked as the No.4 featherweight in the world but he comes off his first loss, suffered against currently #1 Fw Josh Warrington (Josh Warrington vs Kid Galahad); before this bout, in 2018, he had beat Irving Berry, Toka Kahn Clary (Kid Galahad vs Toka Kahn Clary) and Brayan Mairena.
His opponent, the former Ibo and interim Wba Fw champion Claudio Marrero, has an official boxing record of 24-3-0 (17 knockouts) and he entered as the No.9 in the same weight class. He fought twice last year losing to Tugstsogt Nyambayar (Tugstsogt Nyambayar vs Claudio Marrero) and beating Eduardo Ramirez (Claudio Marrero vs Eduardo Ramirez). Galahad vs Marrero, IBF featherweight title final eliminator, is on the undercard of Kell Brook vs Mark DeLuca. Watch the video and rate this fight!