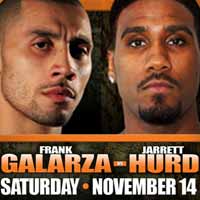 Review by AllTheBestFights.com: 2015-11-14, pretty good fight between Frank Galarza and Jarrett Hurd: it gets three stars.

Both undefeated, Frank Galarza entered this fight with a boxing record of 17-0-2 (11 knockouts) and he is ranked as the No.64 super welterweight in the world while his opponent, Jarrett Hurd, has a perfect record of 16-0-0 (10 knockouts) and he entered as the No.61 in the same weight class. Both boxers have already fought twice in 2015: Galarza has defeated Raul Munoz and Sheldon Moore while Hurd has beat Eric Mitchell and Jeff Lentz. Galarza vs Hurd is the main event of the evening (since Gary Russell Jr suffered a cut during a training session and forced to withdraw from the defense against Oscar Escandon). Watch the video and rate this fight!

Posted by BoxeoTijuana.com on Sabato 14 novembre 2015