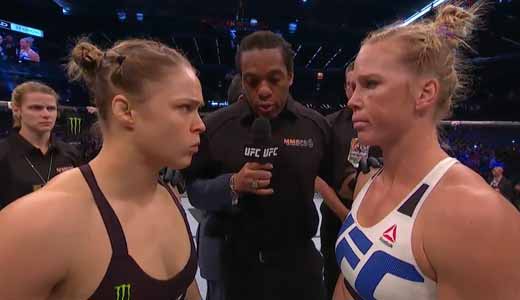 Review by AllTheBestFights.com: 2015-11-15, epic fight with some tough exchanges and a spectacular finish: Ronda Rousey vs Holly Holm is one of the best mma fights of the year 2015 and it gets four stars (UFC Fight of the Night and UFC Performance of the Night).

Both undefeated, the black belt in judo and former Strikeforce Bw champion Ronda Rousey entered this fight with a perfect mma record of 12-0-0 (100% finishing rate) and she is ranked as the No.1 women’s bantamweight in the world while her opponent, the former Wbc, Wba, Wbf and Iba boxing champion Holly Holm, has an official record of 9-0-0 (67% ko/tko victory rate – she has never won via submission) and she entered as the No.8 in the same weight class. Both fighters have already fought twice in 2015: ‘Rowdy’ Rousey has beat Cat Zingano (4-stars-fight, Rousey vs Zingano) and Bethe Correia (=Rousey vs Correia) while Holm has won over Raquel Pennington (=Holm vs Pennington) and Marion Reneau (=Holm vs Reneau). Rousey vs Holm, main event of Ufc 193, is valid for the Ufc women’s bantamweight title (held by Rousey). Watch the video and rate this fight!