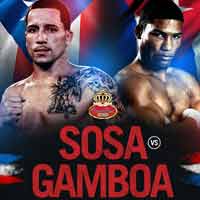 Review by AllTheBestFights.com: 2017-11-25, fight not so exciting between Yuriorkis Gamboa and Jason Sosa: it gets two stars.

The former Wba super-Fw champion Jason Sosa entered this fight with a pro boxing record of 20-2-4 (15 KOs=75%) and he is ranked as the No.6 super featherweight in the world but he comes off the loss against #1 Vasyl Lomachenko (=Lomachenko vs Sosa). Before this bout, in 2016, he had beat Javier Fortuna (=Fortuna vs Sosa) and Stephen Smith (=Sosa vs Smith).
His opponent, the 2004 Olympic flyweight gold medalist and former IBF and Wba Fw champion Yuriorkis Gamboa, has a record of 27-2-0 (17 knockouts) and he entered as the No.36 in the same weight class. He has already fought three times in 2017 beating Rene Alvarado (=Gamboa vs Alvarado) and Alexis Reyes (=Gamboa vs Reyes) but between these two bouts he lost to Robinson Castellanos (=Gamboa vs Castellanos). Gamboa vs Sosa is on the undercard of Sergey Kovalev vs Vyacheslav Shabranskyy. Watch the video and rate this fight!