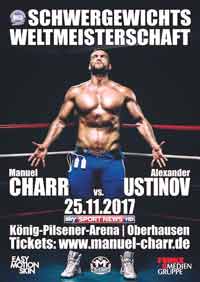 Review by AllTheBestFights.com: 2017-11-25, fight not particularly good between Manuel Charr and Alexander Ustinov: it gets two stars.

Manuel Charr entered this fight with a professional record of 30-4-0 (17 knockouts) but he is not ranked as he hasn’t fought since September 17, 2016 when he defeated Sefer Seferi. Before this bout he had also beat Andrei Mazanik but in 2015 he had lost to Mairis Briedis (=Charr vs Briedis).
His opponent, Alexander Ustinov, has a boxing record of 34-1-0 (25 knockouts) and he entered as the No.39 heavyweight in the world. He suffered his only loss when he faced Kubrat Pulev in 2012 (=Pulev vs Ustinov); since then he has won seven consecutive bouts beating Raphael Zumbano Love in 2017. Charr vs Ustinov is valid for the vacant WBA World heavyweight title. Watch the video and rate this fight!