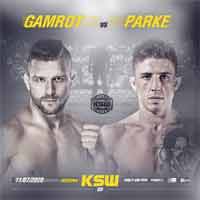 Review by AllTheBestFights.com: 2020-07-11, some good exchanges between Mateusz Gamrot and Norman Parke 3 but it is not enough to get three stars: it gets two.
The undefeated former Ksw Fw and Lw champion Mateusz Gamrot entered this fight with a perfect mma record of 15-0-0 (53% finishing rate) and he is ranked as the No.16 featherweight in the world. In his last two bouts he has won over Grzegorz Szulakowski and Kleber Koike Erbst (Mateusz Gamrot vs Kleber Koike Erbst).
His opponent, the black belt in judo, Tuf Lw tournament winner and interim Ksw Lw champ Norman Parke, has an official record of 28-6-1 (57% finishing rate) and he entered as the No.51 lightweight. He lost to Gamrot in their first fight in 2017 (Mateusz Gamrot vs Norman Parke) while their second bout ended in a no-contest (Mateusz Gamrot vs Norman Parke 2); since then he has won five consecutive fights defeating Borys Mankowski, Artur Sowinski and Marcin Wrzosek in 2019. Gamrot vs Parke 3, main event of KSW 53, is valid for the KSW lightweight title. Watch the video and rate this fight!